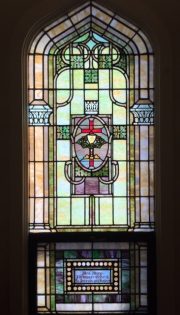 Prior to 1764, the land which is now known as Perry County was owned by the “Five Nations” and later the “Six Nations.” In 1764 the land that makes up Perry County and thus, the land that Christ Lutheran Church occupies today, became part of the lands transferred by the Treaty of Albany.

The official year of the church’s founding is 1798, but the Lutheran’s according to historical documents were meeting as early as 1780 in private homes, barns, schools, and in the summer, shaded areas. In 1855 the “Reformed People” and the Lutherans came together because they felt it was necessary to have a building that could be used by both congregations year-round. In 1798 what was known as the “Log Union Church” was built.

By 1855 the old log building was deteriorating beyond repair, and the two congregations decided to tear it down, and each built their own church. In 1856 the cornerstone of the new building was laid close to the same spot, and is known as “Christ Lutheran Church.”